In March 2013 and May 2014, I led expeditions to the seas off south-east New Caledonia with the goal being to catch at least one of the mystery streaky storm-petrels which we have seen on the West Pacific Odyssey expedition on almost annual basis since 2008.  This project was organised in collaboration with Aaron Russ from Heritage Expeditions and (in 2013) the local Birdlife partner, SCO, and although multiple good photos of the storm-petrel were taken, unfortunately, our attempts to capture one were frustrated, with adverse weather playing an important part in this.......

On the more recent expedition, we saw the bird on several occasions inside the reef system which surrounds southern New Caledonia and there was some evidence to suggest the birds were breeding locally.

Aaron and I are keen to continue this project with the view to resolving this mystery and hopefully finding the breeding grounds and plan to return to New Caledonia.  Once this is confirmed, a small number of places would be available on the expedition for ‘paying participants’.

In both years, we chartered the same vessel but the plans for the next expedition have not yet been clarified although the intention is to change the emphasis and search areas where we believe the bird may be breeding.  It is important to stress that we have no intention of ‘taking a specimen’ and after the bird has been measured, photographed and blood and feather samples have been taken (for DNA analysis), the bird will be released.

The vessel we used in 2013 and 2014 was a sailing catamaran and everyone slept in bunks in the two hulls (although we anchored up off a coral cay most nights) so there wasn't much in the way of privacy, although hopefully there was plenty of good food and great company !!!

As New Caledonia is amongst the priciest places on the planet, we asked each participant to contribute US$5,500, although the costs for the next expedition have not yet been calculated.  It is important to stress that this only covered the cost of food and lodging for the nights on the catamaran.  Participants were responsible for their own flights, transfers plus accommodation and meals in Noumea, although we organised rooms at a reasonably priced downtown hotel.

To read a copy of the article which was published in Birding World magazine and more photos of the storm-petrel, please click here.

For further details, please contact me via the contacts page.

The catamaran chartered for the 2013 expedition which we also used in 2014 (see below).  Although the sleeping arrangements are somewhat 'open plan', ie bunks in the two hulls (see bottom right), there is plenty of space on deck and we intend to travel at below capacity to maximise on comfort. 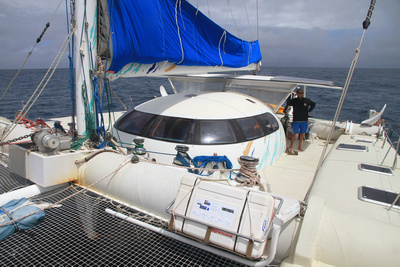 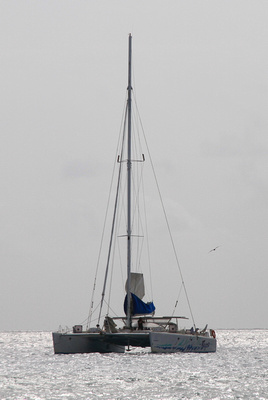 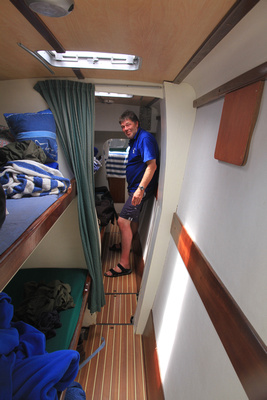